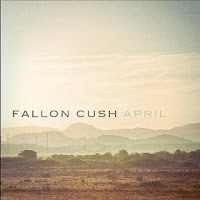 Fallon Cush, though ostensibly the vehicle of Australian singer-songwriter Steve Smith, effortlessly tap into the pop traditions of Crowded House, Marshall Crenshaw and The Jayhawks. Which is to say Smith writes perfectly crafted hook-laden songs, and his regular band supply an animated, always appropriate, roots-pop backing. I’m sure that’s an over simplification, but isn’t that the joy of great pop music; Fallon Cush make the process sound effortless, and the listener reaps the benefits.

There 2011 self-titled debut grabbed plenty of headlines and found itself on plenty of year-end best-of lists. I’ll be amazed if “April” isn’t just as successful. Its charms are many and will surely appeal to anyone with an appreciation of great tunes, grown-up songwriting and an insatiable desire to join in on a chorus.

Just about everything here would sound perfectly at home on a quality radio station, but I must mention a few tracks in particular or I won’t sleep tonight. Opener “It's a Line” sets the scene with lush Hammond organ underpinning a melody which could have been lifted from an early Be Bop Deluxe album, but retains an earthiness which connects on every level. “Forever After” is ambitious and marvelous, and tips its cap to both Gary Louris and Jeff Tweedy, while “Honey Honey” is quite simply a perfect example of rural, honest-to-goodness, country-pop.
www.falloncush.com
Rob F.