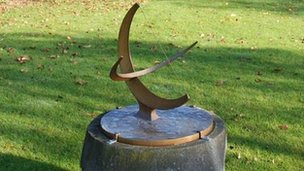 A bronze sculpture by Henry Moore, valued at up to £500,000, has been stolen from the grounds of a Hertfordshire museum.

The 22in-high Sundial, 1965, was taken from The Henry Moore Foundation in Much Hadham on Tuesday night.

Seven years ago, a bronze statue worth £3m was stolen from the same museum - the sculptor's former home - and was never recovered.

Police later said they believed it had been melted down for its scrap value.

CCTV pictures of the 2005 theft showed three men loading the statue of "a reclining figure" on to the back of a Mercedes lorry using a crane.

Police are appealing for anyone with information about the latest incident to come forward.

Detective Inspector Paul Watts said: "This Sundial sculpture is a valuable piece and we are very keen to speak to anyone who may have seen it since 16:30 on 10 July."

The son of a coalminer, Castleford-born Henry Moore (1898-1986) is regarded as the UK's most famous sculptor.