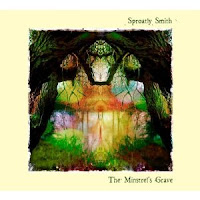 Sproatly Smith - The Minstrel's Grave (Folk Police Recordings)
Sproatly Smith hail from the historically pagan, cider producing West Midlands county of Herefordshire and embrace traditional folk, pastoral English psychedelia as well as incorporating samples and special effects. "The Minstrel's Grave" is the first of three full-length albums released as an open edition, and they look set to set a few solstice festivals on fire this year.

From the outset this amalgam of influences immerses us deeply in Sproatly Smith's world of weird, where "The Mother Said" melds sound collages with Watch With Mother style nostalgic TV scores. The highly emotive, fragile and marvellous whisperings of the (almost customary in folk) female lead vocalist(s) are garnished with wild and widely varied instrumentation which is heavy on finger picked guitar and flutes. Aside the more traditional sounds are the occasional science fictional synthetic blurp ("Death"), a siren's song of musical saw ("The Mermaid of Marden") and twee twinklings set to BBC sound recordings of a village shop. If you can hold your nerve long enough there’s "Elysium", which after descending into a trip of deadly nightshade, explodes into a bombastic romp that would complement the most psychedelic of cop chase scenes.

Highlights "Blackthorn Winter" adds a handful of Fresh Maggots and is flavoured with eastern promise, "The Fabled Hare / Isobel Goudie" Maddy Prior / Alex Harvey medley is a nine minute droned and soulfully strung psych-acid-folk gemstone and "The Blue Flame" holds plenty for fans of Espers and seeps the aroma of Parsley, Sage, Rosemary and Thyme.
www.myspace.com/sproatlysmith
www.folkpolicerecordings.com
Willsk