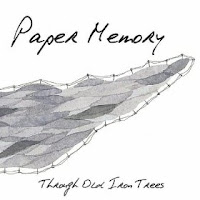 When it comes to musical inspiration, nothing works quite as well as a good ol’ fashioned love story. Paper Memory is really just one man, Australian singer-songwriter-musician Derek Goodreid, and his album is inspired almost solely by love. Of course there are complications, and in this case they’re mostly logistical. You see, Goodreid fell in love with, and eventually married Heidi, a Norwegian, so when songwriters talk about journeys – as they’re often inclined to do - in this case there really was a physical voyage to undertake (8618 miles from Fremantle to Oslo – as the crow flies).

Willfully understated; even the album launch was held in the couple’s Oslo living room, Goodreid takes his musical leads from songwriters such as Elliott Smith and Bon Iver, where words with meaning are underpinned by melodies that attach themselves to sympathetic brain matter. Joined on the recording by his wife and assorted friends, there’s a sense of togetherness present throughout the album, especially where Heidi sings with her husband on tracks like “The Difference” and the delightful “Fear Not”. It’s definitely an album to be enjoyed in a single sitting, where the stories can run together and sometimes merge, and I’m sure I won’t be the only listener on the look out for a second installment.
www.papermemory.bandcamp.com
www.facebook.com/papermemorymusic
Rob F.