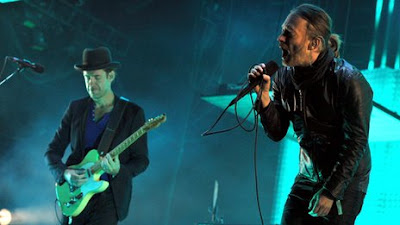 Members of Radiohead and Pink Floyd are among the musicians angered by plans for a new EU copyright law.

They say the draft law, intended to give performers, composers and producers more rights over their royalties, does not go far enough.

The Commission insists the plans will modernise the way money is distributed.

Performers, producers and writers are supposed to earn royalties every time their music is played on radio, television or public spaces.

The money is collected by about 250 societies around Europe - but the Commission says many of them hold on to "substantial amounts" of that cash.

Some 5% to 10% of payments are kept for as long as three years after they are collected - which means artists are currently owed billions of pounds.

However, artists argue that figure is much higher and claim societies have no incentive to pay up quickly because of the returns they can make on the money in their hands.

The draft law, which which will need approval from the European Parliament and the EU's 27 member countries, would mean societies had 12 months after the financial year in which a song was played to pay royalties.

If the copyright owner cannot be identified within five years, the collecting society would be allowed to keep the funds.

But artists say the five-year grace period will only encourage the collecting societies to keep the money they owe, and reduces the incentive to find the rights-holder.

"You thus legitimise one of the most problematic forms of embezzlement adopted by some collecting societies in Europe," their letter reads.

"You have broken your promises and encourage the management of collecting societies to keep the fruits of our creativity," read the artists' letter to the Commission, adding: "You stole our hopes."

The letter was sent by a group representing more than 6,000 artists across the EU, including Robbie Williams, Radiohead, Pink Floyd, Annie Lennox and dance producer CJ Bolland.

The group is an alliance of four European societies - Younison, the Featured Artists' Colaition, DJ Monitor and Technopol.

For their part, royalty collection societies argue that they try to pay rights-holders as quickly as they can, and that many already pay their members much quicker than the draft law demands.

In Britain, the royalty collection agency is PRS for Music, which makes payments to its members every three months.

"Collecting societies like PRS for Music perform a really valuable role in licensing music use across Europe," he said. "We back good standards that ensure music creators get paid their royalties accurately and fast."