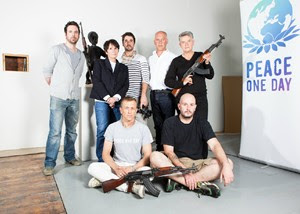 Contemporary artists have joined a peace-building project which will see them refashion decommission AK-47 rifles into works of art.

British artist Damien Hirst is one of those involved in the AKA Peace exhibition in London in September.

It will see 23 artists reinterpret the AK-47 assault rifle as a "weapon of peace".

The idea was conceived by photographer Bran Symondson, following his experience as a soldier in Afghanistan.

"Everyone knows the AK-47 and I thought, wouldn't it be great to take this iconic weapon and turn it into a thing of intrigue and art, rather than one of fear," said Bran.

"You give a stick to a boy and he'll make it into a gun. There is glamour in war and conflict. I don't think [this project] glamorises [the weapon], I think it gets the message across that it can be used for something else.

"The fact that these AK-47s have been used, that they've come from war zones and now they are decomissioned...there's 24 less AK-47s in the world doing damage," he said.

The exhibition coincides with Peace Day on 21 September 2012, which will be marked by the Peace One Day Concert at Wembley Arena in London on 21 September.

It is being curated by artist Jake Chapman, who - along with his brother Dinos - was nominated in 2003 for the Turner Prize.

"I've tried to get artists to act on other issues and sometimes it's quite complicated to get them to be politically motivated, but this was quite simple," he said.

"In some ways people have become apathetic about being vocal about stuff. This project is good because it's within the realms of art and if the art is good it operates well.

He said acting aesthetically on something which has pragmatic use is "quite an interesting twist".
"I think [the artists] were equally convinced that it had a necessary logic."

"It's not that the art has to go begging because it's about Peace One Day, the work should stand on its own," added Jake.

Langlands and Bell have worked as war artists in Afghanistan since 2002 and have seen the AK-47 assault rifle used regularly throughout the country.

They had no hesitation when asked to take part, but admitted there are challenges involved in refashioning an object with such strong connotations.

"Any gun, especially any military gun, is a very loaded image and what might seem an ironic pose to us could easily be taken as a complacent proposition by somebody else, so you have to be very careful how you use it," said Ben Langlands.

"In the past when we've worked with these very sensitive and loaded issues we've tried to incorporate in the work a way for people to gain greater awareness of what the images are and to allow the artwork to be a route into a better understanding of what the conflict is about and why it has arisen," he added.

Another of the artists taking part, Antony Micallef , agreed that a careful interpretation of the weapon is of paramount importance.

"It's a very iconic gun and there's lots of cliches you could easily do with a gun.

"You've got to go away and really think about it and try and do something thoughtful but at the same time respectful.

"This thing could have killed somebody, so you don't want to make light of it," he added.

Peace Day 2012 will be marked by the Peace One Day Concert, at Wembley Arena in London on 21 September, headlined by Sir Elton John with James Morrison and 2Cellos recently joining the line up.

The AKA Peace exhibition is due to take place at the The Institute of Contemporary Arts in London on 24 - 30 September.

The exhibited works will then be auctioned with proceeds of the sale going to the Peace One Day charity.