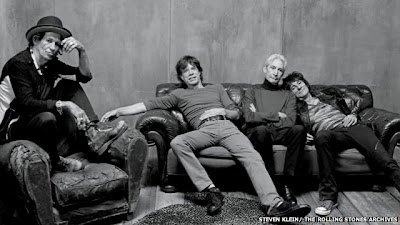 The Rolling Stones' guitarist Keith Richards says the band have met up for "a couple of rehearsals" as they mark 50 years together.

Rumours of a tour to celebrate the band's golden anniversary have been circulating for a number of years.

However, Richards would not go so far as to say when the quartet would be performing in public again.

"There's things in the works - I think it's definitely happening," he told the BBC. "But when? I can't say yet."

"We're playing around with the idea and had a couple of rehearsals - we've got together and it feels so good."

Richards was speaking to BBC arts editor Will Gompertz the day before the band turns 50.

They played their first gig at London's Marquee Club on 12 July, 1962; and had their first hit, a cover of Chuck Berry's Come On, 12 months later.

A photography exhibition marking the band's long career will be launched London's Somerset House on Thursday.

Talking about the pictures, which include reportage, live concert and studio images, the guitarist said he felt "weird" looking back at the group's early days.

"It's amazing - most of these pictures I think, 'where was the cameraman?' I don't remember them being there," he said.

He added he would like the band to continue for as long as possible, saying: "There might be life in the old dog yet - we'll die gracefully, elegantly wasted.

"Sometimes its hard work and you wonder why you're doing it, but apart from those few moments it's been an incredible adventure."

The Stones last world tour, A Bigger Bang, played to 4.5m people in 32 countries over two years before it finished in London in 2007.