News: Tate Modern to be plunged into darkness... 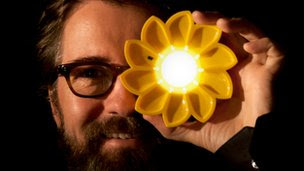 The Tate Modern is to host a series of blackouts during which the public can explore the museum by torchlight.

As part of the London 2012 Festival, Scandinavian artist Olafur Eliasson has created a portable solar-powered lamp, in the shape of the sun.

Saturday nights will see up to 500 people visit the Tate's Surrealist galleries lit by his "portable eye".
The torch has been designed to bring light to the 1.6 billion people without direct access to electricity.

The lamp - dubbed Little Sun - has been mass produced in China and will be distributed in developing countries around the world, via small businesses who will purchase it at a heavily discounted price.

"Little Sun is a small work of art with a large reach, " said Eliasson, who co-created the lamp with Danish engineer Frederik Ottesen.

The artist - best known for The Weather Project, his 2003 installation in the Tate Modern's Turbine Hall, called his latest creation "highly personal".

"An artwork is never just the object," he said. "It is also the experience and its contextual impact, how it is used and enjoyed, how it raises questions and changes ways of thinking and living."

The blackouts - which will take place over four weeks from 28 July - will echo the 1938 International Surrealist Exhibition in Paris, where Man Ray supplied visitors with torches to explore the Galerie des Beaux-Arts.

For two hours, the lights will go out at the former power station, giving visitors a whole new perspective of the gallery. The event will be free, with the purchase of a Little Sun, which will cost £16.50.

Ruth McKenzie, director of London 2012, said Eliasson was "one of the first artists we approached to come up with a project for the festival".

But an earlier proposal by Eliasson - an outdoor installation entitled Take A Deep Breath - was rejected by Olympics bosses amid claims that it would be viewed as "contentious" and was "very expensive".

"This project has undergone some changes, and there we are," she told BBC News. "First drafts are never a good indication of finished ideas."

"Olafur is remarkably open about his desire... to use art to change the world. His iterations of how have changed and developed over the last year and a half.

Eliasson also insisted the Little Sun was "part of the original project", claiming "things changed throughout the creative process".

But he added: "I push boundaries... sometimes a little bit over the limit. This is how I have always worked."

The previous project was reportedly dropped after the Olympic Lottery Distributor withdrew its grant.
"In the end they didn't feel that the project met their criteria," said Ms McKenzie. "They have the freedom to make their own decision."

"Personally, I think Olafur's Little Sun will be one of the most significant projects in the London 2012 Festival."