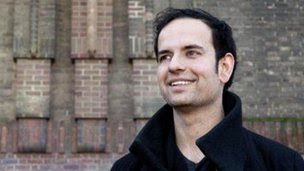 The latest art installation in Tate Modern's Turbine Hall in London will see choreographed performers mingle with the gallery's visitors.

These Associations by British-German artist Tino Sehgal has been rehearsed behind closed doors for several months.

It will consist "purely of live encounters between people", incorporating dance, conversations and singing, the gallery said.

"Tino Sehgal's piece has managed to fill this vast space with life and energy using nothing but the human body and social interaction as its medium," he added.

In previous years, the Turbine Hall has been filled with vast, eye-catching works of art - from giant spiders to towering mounds of ceramic seeds.

But Sehgal, the 13th artist commissioned to fill the space, does not trade in physical works of art.

Trained in both political economics and choreography, he enlists live participants to create performance art tailored to the exhibition space.

His previous works include This Is Propaganda (2002), in which people dressed as museum guards chanted, "This is propaganda/You know/You know", and sang the names of works of art as visitors entered a gallery.

This Is New (2003) required a museum employee to call out headlines from the day's newspaper.
"Our culture is hung up on and overemphasises what can be derived from material objects," he told The Guardian last week.

"[But] the 21st Century is not about accumulating material wealth like the 20th Century. It's already eroding. I'm not against material things - I just don't work with them."

For his Tate exhibition, which opens to the public on Tuesday, Sehgal will direct the action, reacting to the movements of people in the Turbine Hall.

At times his performers will be "almost indistinguishable" from the public, the gallery said. At others, there will be "a clearly defined and constructed situation".

"These associations can be perceived quite differently from the elevated position of the bridge, or gallery windows, as opposed to the floor of the Turbine Hall, where visitors are potentially swept up in the movement and dialogue of the piece."

New works for the Turbine Hall are usually unveiled in October, but Sehgal's piece was brought forward to coincide with the Olympic Games and the London 2012 Festival.

Tate curator Jessica Morgan said the work would "paint a picture of London", although Sehgal has said the work was not directly influenced by the Games.