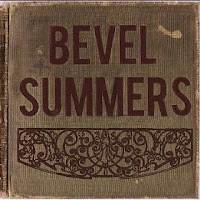 Bevel Summers got together in the autumn of 2010 when UNC seniors David Hutcheson and Jeb Brinkley both broke up with long-term girlfriends and discovered each others love of writing and performing music. After regular gigging, including a residency at a respected local club, they recruited friends Alex Van Gils (upright bass) and Andrew Magill (fiddle) and recorded their self-titled debut record. Released in the spring of 2012, its upbeat jams and gritty Americana method make it a welcome addition the current thriving folk revival.

Only seven tracks long and clocking in at just over 23 minutes, they don’t have a lot of time to make their musical point, but they do so with strong ear-catching songs and plenty of enthusiasm. Live I imagine they’re an absolute blast; good fun and crowd pleasing, and it’s to their credit that livelier numbers like “Brand New Man” and “Checkin' Out” provide plenty of thrills and lose nothing from their trip to the studio, while more sedate material like “Hold On Baby” and “Dead Drunk” tap beautifully into the place where old time country and folk blues overlap.

So, no complaints from me, and I’m sure they’ve made their growing fanbase ecstatic. They’ve also recently changed the band around and taken on four new members. Hopefully creative sparks will fly all over again, and I’m already looking forward to hearing new songs.
www.bevelsummers.com
Rob F.