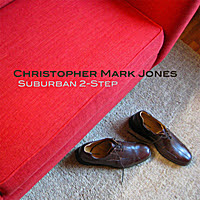 Christopher Mark Jones has paid his dues. In the ‘70s he busked in Paris, played the UK folk clubs and released a debut album on the legendary Transatlantic folk label (the album, No More Range To Roam, is available again at all the usual outlets). Though he continued to broaden his musical palette, incorporating both rock and jazz styles, his next move was to take time out, to live life and raise a family.

The comeback album, 2010’s “Heartland Variations” earned glowing reviews and his latest, the just released “Suburban 2-Step” will surely follow suit. His voice, matured with age, is soulful, rich and weathered, with an in-built frailty that is wholly beguiling. He’s a talented wordsmith, with a relaxed, easy approach, which doesn’t disguise the fact that he’s got plenty to say, whether it’s a nostalgic recollection of family life or future hopes and desires.

Produced with a full band, indeed a dozen musicians are credited, and Jones plays guitar and various keyboards, the sound is layered and warm, and the best songs are perfectly suitable for radio play on stations aimed at grown-ups. Perhaps my favourites are “Home At Last”, a paean to homeownership, which seems almost trite when expressed that simply, but in reality articulates a heartfelt desire to belong somewhere – and for somewhere to belong - and “The Numbers”, a folk-pop future classic that has rooted itself in the part of my brain that prompts unsolicited outbreaks of song at completely inopportune moments.
www.christopherjonesmusic.com
Rob F.