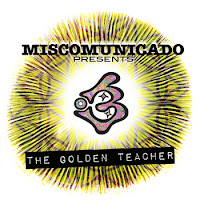 There’s something wonderfully refreshing about Miscomunicado’s approach to their chosen craft. The Fort Collins quintet is obviously enamoured with various jam bands from various eras, but they filter their influences through a primal mesh of early ‘70s proto-punk, art school avant-post-punk and Hawkwind-esque space-rock, and the results are altogether enthralling, and quite different. Whether they’re knowingly throwing these influences into the musical pot, or the ensuing outcome is a matter of pure chance, I’ve no idea, but there’s so much here to be enjoyed and admired whatever the creative process.

“The Golden Teacher” is their second long player and follows promptly on the heals of 2011’s “L’Ocean”, though it certainly doesn’t feel rushed. Indeed, it seems a more rounded recording than its predecessor, and certainly more inclined to explore different sounds. Opener “On The Bus” hits a loose, infectious groove early on, and comes off like a heady mix of Pavement and Phish. Next, “Golden Forest”, begins briskly like a late ‘70s new waver, before settling into something that Bloc Party fans might want to seek out and cozy up to. For those who enjoy the more experimental aspects of psychedelic rock, be sure to check out “ICANMOODMUSIC pt.3”. It’s combination of mumbled spoken word passages, demented chuckles and relentless layers of strum and drone isn’t a moment too long at nearly ten minutes.
www.facebook.com/miscomunicado
Rob F.
Posted by Bangs at 7/05/2012 02:15:00 pm