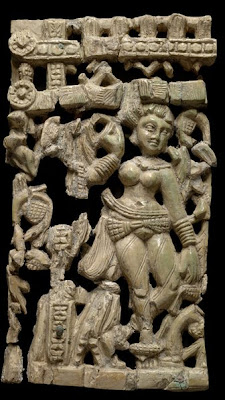 The British Museum has assisted in the return of 843 artefacts to Afghanistan, almost 20 years after they were stolen or smuggled abroad.

The items include examples of the Begram Ivories, seen at the British Museum's Afghanistan 2011 exhibition, and an important sculpture of Buddha.

Both were stolen from the National Museum of Afghanistan during its civil war and ended up on the black market.

The artefacts were passed to the museum for safekeeping, ahead of their return.

The items were seized by customs officials and the Art and Antiques Unit of the Metropolitan Police as they passed through Britain, presumably for sale on the black market.

All the artefacts were identified by experts at the museum.

Other objects - some of which were saved by private individuals - include Bronze Age carvings and medieval Islamic coins.

Neil MacGregor, director of the British Museum, said the pieces' restitution was "the outcome of the ongoing dialogue between our cultural institutions, as well as the support of the authorities, to identify and preserve items from the national collection of Afghanistan that had been illegally removed during years of conflict".

Assisted by the Royal Air Force, the collection left the UK last week, bound for Kabul, via the army base in Helmand.

More than two thirds of the exhibits at the National Museum in Kabul were stolen or destroyed during the 1990s Afghan civil war.

"I'd like to think that anyone would do the same for us if we were unlucky to suffer major disaster or crisis," the British Museum's St John Simpson told The Independent.