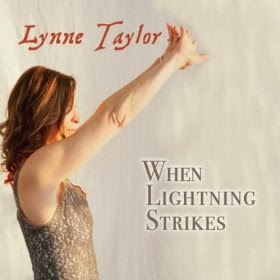 A stalwart of her local New England scene, Lynne Taylor has been a professional musician since she was 14 years old, playing solo and in various groupings. When comparisons to other artists are mentioned, names like Tori Amos, Fiona Apple and Sheryl Crow are often referenced, but there’s also a timelessness to Taylor’s best work – and there’s plenty of it to be found on “When Lightning Strikes” - to spark memories of Buffy Sainte Marie, Carole King and a gaggle of revered ‘70s west coast songwriters.

Her instrument of choice is the piano, though the majority of her new songs are presented within a full band setting, where unlikely rhythms and eclectic arrangements are explored and investigated. It makes “When Lightning Strikes” a riveting listen, and the listener can expect nothing except the wholly unexpected.

“Butterfly” launches the collection, and its simple, insistent piano motif is soon added to by a half chanted / half sung vocal and tempered stings – the effect is simultaneously stimulating, strangely languid and utterly beguiling. It’s followed by the jaunty, country-rock-wired “Back By Suppertime”, a song and delivery that would have sat perfectly on Gene Clark and Carla Olson’s classic “So Rebellious A Lover” record - nice guitar solo, too.

A Spanish influence comes to bear on “Pablo's Glue”, the longest track on the album, where Latin guitars emphasize the narrative, and the percussion-heavy “Angel That Flew” stretches Taylor’s vocal chords, and brings to mind aborigine mantra and primal movement. She’s unafraid to get her hands dirty with a little political comment (“Grand Empire”) and adds to her palette with the jazz-specked classicism of “No Words”.

In the hands of a lesser artist “When Lightning Strikes” may have come across as unfocussed or confused, but not so here. There’s a singular musical vision behind these eleven tracks, and Taylor must take full credit for delivering a super album that celebrates and rejoices in its diversity, but is never distracted by it.
www.facebook.com/LynneTaylorBand
www.reverbnation.com/lynnetaylor
Lynne Taylor CD Baby Page
Phil S.