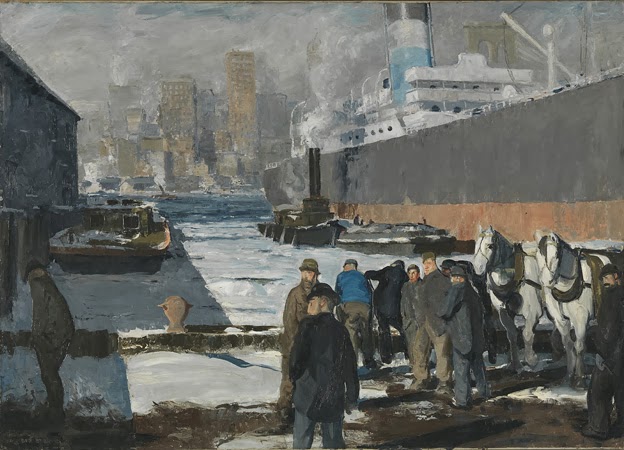 The National Gallery has made its first ever acquisition of a painting by an American artist.

George Bellows' 1912 painting, Men of the Docks, depicts a group of workers standing by the waterfront in Brooklyn.

The museum paid £15.6m ($25.5m) for the artwork, which was previously owned by Randolph College in Virginia.

It marks a major shift in the gallery's collecting policy, previously limited to paintings by European artists from the Renaissance to around 1900.

Bellows, who died at the age of 42 from appendicitis, documented the hardship of working life as New York emerged into the 20th Century.

"I'm a great fan of American painting, but great examples are hard to come by," said Dr Nicholas Penny, director of the National Gallery.

"Bellows has almost always been seen in the context of American painting, but the way he painted owed much to Manet, and his depiction of the violence and victims of New York derived from Goya and earlier Spanish art."

The National Gallery currently owns paintings by American-born European artists such as Copley and Whistler, and one minor American work, The Delaware Water Gap by George Inness, which is rarely on display.

Realist painter Bellows was the subject of a 2011 exhibition at the National and a retrospective at the Royal Academy last year.

Men of the Docks, the final in a series depicting workers gathered on an icy day on the New York waterfront, will hang alongside Impressionists like Monet and Pissarro.

Christopher Riopelle, the gallery's curator of post-1800 paintings, called Bellows "the American master" whose work evoked "the raw and unbeautiful energy of the urban experience."

The acquisition marks the start of a Transatlantic academic partnership between Randolph College and the London-based gallery.

"We feel proud that an international audience will now become more aware of Randolph and our long stewardship of Men of the Docks," said college president Bradley W Bateman.

The Bellows painting was bought principally with money from a fund established by John Paul Getty, established before his death in 2003, and is the first publicly-owned Bellows in the UK.