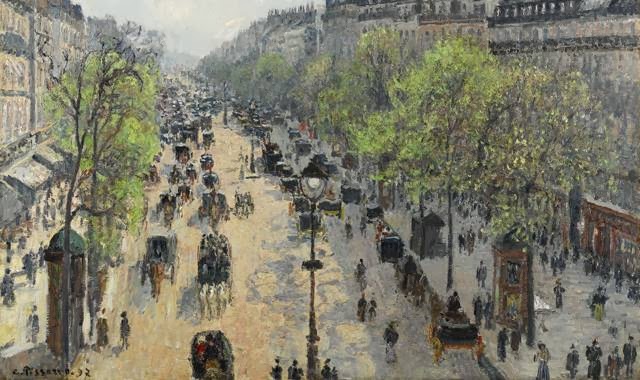 A painting by impressionist Camille Pissarro has sold for £19.9 million, nearly five times the previous record for a single work by the artist.

Sotheby's in London said Boulevard Montmartre, Matinee De Printemps was "one of the greatest impressionist works to come to auction in a decade".

It was once owned by a prominent German Jewish art collector who was forced to sell his paintings by the Nazis.

Estimated to fetch £7-10 million, it had never sold at auction previously.

The previous record for a Pissarro painting was set in 2009, when Le Pont Boieldieu Et La Gare D'Orleans Rouen, Soleil sold for £4.3 million.

A quartet of the artist's works entitled Les Quatre Saisons fetched £8.96 million in 2007.

It was regarded as one of the best pre-war collections of 19th and 20th Century art in Germany and was broken up by the Nazis.

Silberberg later died in the Holocaust.

The Pissarro painting was restituted to Silberberg's family in 2000 and Helena Newman from Sotheby's said the origins of the painting would have enhanced its appeal to buyers.

Created after the artist admitted himself to an asylum after cutting off his ear, it is the highest price a van Gogh piece has achieved at a London auction in the past 25 years.