'Japanese Beethoven' admits he is a fraud 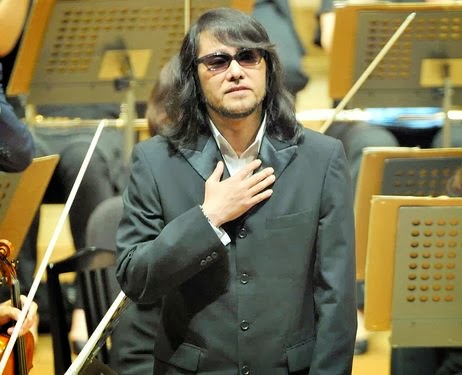 A deaf composer who has been dubbed "Japan's Beethoven" has admitted hiring someone else to write his music for nearly two decades.

Mamoru Samuragochi shot to fame in the mid-1990s and is most famous for his Hiroshima Symphony No 1, dedicated to those killed in the 1945 atomic blast.

The 50-year-old has now confessed he has not composed his own music since 1996.
The real composer of the musician's "hits" has not been formally named.

According to Japanese media, though, a man named Takashi Niigaki issued a statement on Wednesday claiming to be the "ghost" composer and to have worked for Samuragochi for 18 years.

According to his now defunct website, Samuragochi was taught how to play the piano by his mother when he was four and began playing Beethoven and Bach when he was 10.

He made his first breakthrough creating music for video games including Resident Evil and Onimusha.

He completely lost his hearing when he was 35 but continued to compose music, apparently relying on his "absolute pitch".

His Hiroshima Symphony No 1, completed in 2003, became a major classical music hit, selling more than 100,000 copies in Japan.

It went on to become an anthemic tribute known informally as the "Symphony of Hope", after Samuragochi was filmed meeting survivors in the tsunami-battered Tohoku region in 2011.

Apologising on his behalf, Samuragochi's solicitor said the musician was "deeply sorry as he has betrayed fans and disappointed others".

"He knows he could not possibly make any excuse for what he has done. He is mentally distressed and not in a condition to properly express his own thoughts".

It is believed Samuragochi paid for the commissions while giving the ideas for his work to the other composer.

"I've been told that there are certain circumstances that make it hard for the person [who composed the works] to come out in public," his lawyer said.

"Samuragochi has therefore come to describe himself as the sole composer."

Nippon Columbia, Samuragochi's record company, said it was "flabbergasted and deeply infuriated" by his revelation.

Japanese Winter Olympics hopeful, figure skater Daisuke Takahashi, has also been caught up in the scandal as his programme includes a dance to Samuragochi's Sonatina for Violin - also not penned by the musician.