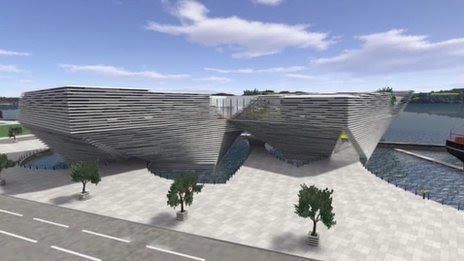 The £45m project is set to transform Dundee's waterfront area

The Heritage Lottery Fund has announced it is to make a £9.4m grant to Dundee's V&A museum project.

The team behind the ambitious project said the funding was a massive boost towards getting the museum completed on time.

They also dismissed reports that the final cost of the building is set to run over budget from the initial estimate of £45m.

The grant will go towards the costs of the building, including its galleries.

"Today is a moment to savour, to celebrate, because this really signals the countdown to the opening of the project."

He said: "Scotland's achievement in design is world-class and centuries old. The development of V&A at Dundee will for the first time provide Scotland with a dedicated centre to celebrate that achievement".

"This new world-class museum is an exciting addition to the sector providing a source of education and delight for visitors".

The Scottish government has also committed £15m to the project and Creative Scotland is currently considering a funding submission.

Museum directors are also seeking a further £15m from private sources, with £6.7m having already been raised.

The Scottish Design Galleries within the V&A will tell the story of Scotland's contribution to global design, with exhibits ranging from the 17th Century to the present day.