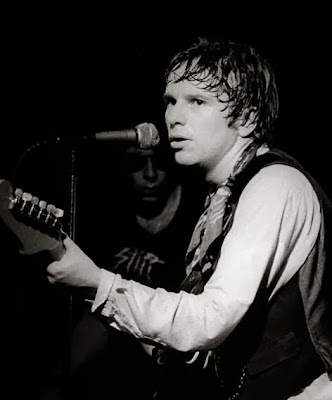 Listen to  "Someone Must've Nailed Us Together" taken from The Len Bright Combo Presents...
https://soundcloud.com/firerecords/the-len-bright-combo-someone

Fire Records will be releasing the WRECKLESS ERIC catalogue over the next few years. As one of the most influential artists to emerge from the Stiff Records stable, Wreckless Eric went on to have one of punk’s biggest hits with “(I'd Go The) Whole Wide World” in 1977 and inspired a legion of artists from Yo La Tengo to The Vaccines and from Marianne Faithful to Lilly Allen.

The first two reissues in the series are the rare and much sought after recordings by The Len Bright Combo, one of Eric’s early post-Stiff bands. Recorded in the mid-80s, The Len Bright Combo Presents and Combo Time were rough garage rock albums, which stayed true to his DIY roots and have now become very difficult to get hold of. The reissues feature new packaging as well as extensive liner notes from the one and only Wreckless Eric.

An explosive beat combo ruling over the mid-80's UK Medway scene, The Len Bright Combo paired Wreckless Eric with the ramshackle rhythm section of former Milkshakes Russ Wilkins and Bruce Band. Putting today's garage pretenders to shame, the combo recorded two albums of rough and ready pop blasts, with the shake and stomp never losing Eric's sharp wit, or melodic punch. These records contain many of his strongest songs, giving his iconic hit "(I'd Go The) Whole Wide World" a run for its money.

Hardly in step with the UK fads of the day, the trio toured with their own PA system, blasting out performances like each one could be their last. Soon, it would be, as they parted ways after two underground albums released in the space of a year, leaving behind a collection of smoldering gems.

These reissues have finally make the albums widely available and have been lovingly re-assembled, including detailed and entertaining liner notes from Eric himself, taking us back to those days, warts and all.