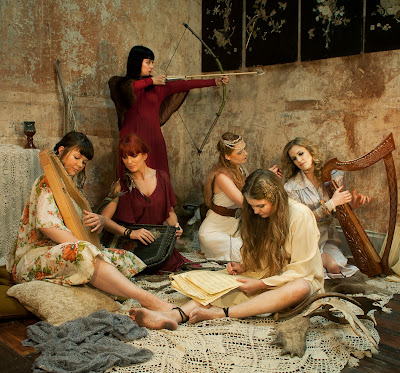 Mediaeval Baebes at Leicester Cathedral, December 6th
It’s a sure sign that Christmas is coming when the Baebes start appearing in the cathedrals of England. This year, with a new album riding high in the classical charts, they’re on fine form, performing two sets, which include a nice mix of popular carols, unpopular carols and medieval tunes.

I’ve got copies of their set lists in front of me, and I know I sat there and listened to the whole thing, but remembering individual tracks presents something of a problem. Theirs is a sound that envelops the listener. The combination of surroundings, songs and stage presentation is hypnotic, and by the time the first set comes to an end, time has been suspended and we’ve been transported back to a far simpler period, perhaps when Leicester’s cathedral was first raised.

It’s spellbinding stuff and wonderfully entertaining. There has been a multitude of Baebes passing though the ranks since Katharine Blake split from Miranda Sex Garden back in the late ‘90s, but her current line-up is good as any. Their singing is exemplary, and in taking turns to introduce and/or explain their songs, each takes their turn in the spotlight.

The second set is equally enthralling, and provides several moments worth highlighting. Their take on “Gaudete” is faultless (the Steeleye Span version is probably the most well known) and it’s followed by an old Arabic song/poem called “Clasp Of A Lion”, which Blake sings beautifully, and quite alone – utterly spine-tingling in the church environ. They encore with “Coventry Carol” and the queue for merchandise stretches to the door.
www.mediaevalbaebes.com
Rob F.