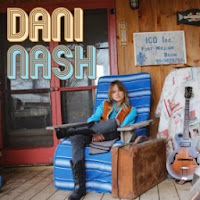 There’s something instantly appealing about Dani Nash, especially as the Toronto based singer-songwriter brings to mind renowned artists like Lucinda Williams and Maria McKee on her ten track, self-titled debut.

Professional, feisty and full of confidence, she’s fashioned a collection of songs with plentiful, classic country grit, bounteous pop hooks and more than enough sass to spare. Her songs certainly don’t hang around, and it’s all over far to quickly in less than half an hour, but when that’s the only complaint that can be mustered, she’s obviously doing most things right.

Nash has a wonderful talent for writing (and performing) songs that immediately get under the skin. Upbeat and direct, it was Nick Lowe who said “it’s an enormous amount of work to make a song sound like you’ve just knocked it off”, and there’s an easiness to Nash’s writing that suggests she’s put the hours in.

Opening cut “Any Old Kind” sets the scene with a loose, shuffling arrangement and a thoroughly addictive lyric. “Messin' N' Runnin' Around” has already been compared to both JJ Cale and Loretta Lynne, and “Fever Is Gone” introduces an unnamed male vocalist for the country duet of the year. Nice fiddle-work, too.

“Dynamite” is just that, and taps into the retro ‘50s rock ‘n’ roll of Imelda May, while final track “I'll Be the One” supplements the collection with a little noirish romantic intrigue.
www.daninashmusic.com
www.facebook.com/dani.nash
Dani Nash CD Baby Page
Phil S.

Dani Nash – Messin' N' Runnin' Around / Since I Broke Your Heart