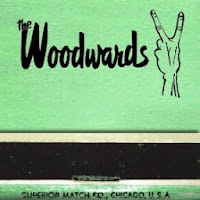 For this second release as The Woodwards, Dutch-born former New York-based artist Peter Schuyff is joined by British (female) Stevie Guy on what is by any measure a highly accomplished album of dark Americana. Treading terrain more recognisably the preserve of Howie Gelb, Cowboy Junkies and the Bon Iver, the eleven numbers presented here showcase the twisted heart of country music every bit as effectively as their peers.

The mood set by creepy opener ‘The Wood’ rarely quickens its step thereafter; but while there’s little urgency of pace, the tension, here aplenty in this collection of menacing modern day folk tales, doesn’t slacken either. The laconic story telling of the principles is sensitively augmented by subtle and respectful production, courtesy of Attie Bauw, and sparse but well-judged support on guitar and drum from Maarten van der Grinten and Boudewijn Bauw respectively.

Given the popular disdain for CD packaging generally an honourable mention is due for the clever outsized ‘book of matches’ design that houses the collection with pleasing aesthetic effect.
www.thewoodwardsmusic.com
www.facebook.com/The-Woodwards
Neil B.