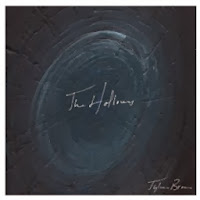 As winter rolls ever onwards it’s unsurprisingly getting colder and wetter. In fact, rain’s lashing against the window as I type, and if I were a small, fictional, fat brown bear, I might well describe the erratic, stormy winds as blustery. Tyler Brown’s new album perfectly fits both my mood and the weather conditions. The North Carolina native has fashioned a collection that warms the soul – whatever that is – and generates an atmosphere that encourages serious listening.

Previous reviewers have mentioned similarities with Bon Iver, and Brown has also declared an interest, but the deliberate, perfectly measured arc of “The Hollows”, together with the sheer soulfulness of his performance, puts me in mind of early releases on the Secretly Canadian and Jagjaguwar labels, and artists/groups like Songs: Ohia and Drunk.