Review: Michael McDermott - Hit Me Back 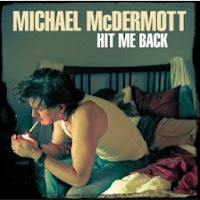 “I hit the bottle pretty hard last night” declares Michael McDermott in the opening lines of title track ‘Hit Me Back’; “and I couldn’t feel much lower”. While peddling personal despair has been very much a standard singer-songwriter default for forty years, McDermott’s own back story suggests his musing is more heartfelt than cynical. His is the misfortune to have been just one of the many rock and roll casualties seized on by a desperate and greedy music business as the ‘next big thing’ only to be discarded just as quickly. Tasting instant acclaim when his first release was likened (in the oldest and most tedious of clichés) to Dylan and Springsteen he was subsequently snatched from the coffee houses of his native Chicago and into the unforgiving clutches of Warner Brothers, MTV and full throttle media promotion. It all petered out just as quickly and (as he says himself) “by the time I was 24 I was over”.

In 1998 Barry Koppelman, the very A&R man responsible for McDermott’s initial launch had turned Hollywood scriptwriter and borrowed the tale of his downward spiral to create an out-of-luck character for his treatment of cult-classic ‘Rounders’. Two decades on recent releases have seen a gradual but markedly more durable level of interest in his work, and the self-released ‘Hit Me Back’ follows well-respected predecessor ‘Hey La La’ in turning his life experiences into a varied collection of gritty country-folk (‘Dreams About Trains’, ‘Italy’), haunting ballads (‘A Deal With the Devil’, ‘The Silent Will Soon Be Singing’) and up-tempo rockers (‘Ever After’ in particular) that suggest earlier references may not have been misplaced after all. If long-time fan Stephen King’s claim that he is “possibly the greatest undiscovered showing of the last twenty years” is somewhat ambitious, this album sees him squaring up as the equal at least of contemporaries Jessie Malin, Alejandro Escovedo and Dave Alvin, no mean feat in itself.
www.michael-mcdermott.com
www.facebook.com/MichaelMcDermottMusic
Neil B.