Arctic Monkeys win NME's best album of 2013 with AM 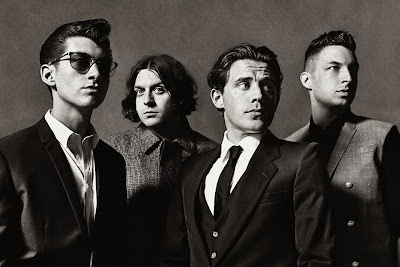 Arctic Monkeys' fifth album, AM, has been chosen by NME as its best album of 2013.

They beat US rapper Kanye West, who was in second place with his latest album Yeezus.

Completing the top three was Queen's of the Stone Age with ...Like Clockwork.

The music magazine also named its top track of the year, which was won by Daft Punk for their single Get Lucky, featuring Pharrell Williams and Nile Rodgers.`

It sold more than one million copies in the UK.

Arcade Fire's Reflektor was in second place, while Arctic Monkeys came in third with Do I Wanna Know?

The awards are part of NME's list of the 50 best albums and tracks of 2013, which appear in this week's online and magazine editions.

Earlier this week Arctic Monkeys were named best headline act at the 10th UK Festival Awards for their performance at this year's Glastonbury.

Their set included the first UK performance of Do I Wanna Know?

Along with Katy Perry, Arctic Monkeys were the first acts to be announced for the Brit Awards 2014 line-up.