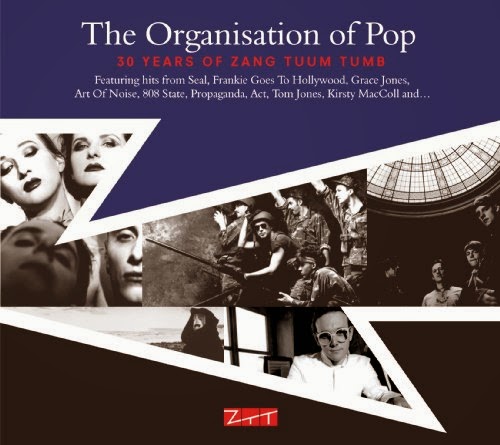 Zang Tuum Tumb was founded in 1983 by record producer (and ex-Buggle) Trevor Horn, his wife and manager Jill Sinclair, together with NME journalist Paul Morley. To mark and celebrate the label’s 30th anniversary, they’ve released “The Organisation Of Pop”, a double-CD anthology collection; the first disc successfully tracing the history of the label through a succession of hit singles, while the second disc showcases experiments, remixes, etc.

It’s an enjoyable and fascinating listen, and emphasizes just how important Trevor Horn’s production was to ‘80s pop - though I think we all new that anyway. All the big hits are present on disc 1: Frankie’s “Relax” (plus “The Power Of Love” and Two Tribes”), Grace Jones’ “Slave To The Rhythm”, Art Of Noise’s “Close (To The Edit)” and Propaganda’s “Duel”, to name just a few.

A couple of gems that somehow passed me by, Shane MacGowan & Sinead O’Connor’s “Haunted” and Kirsty MacColl’s “Angel” (Piano Version) both bring an earthy goodness to the project, and provide some contrast to the polished electronic pop in which Horn and his team specialized.