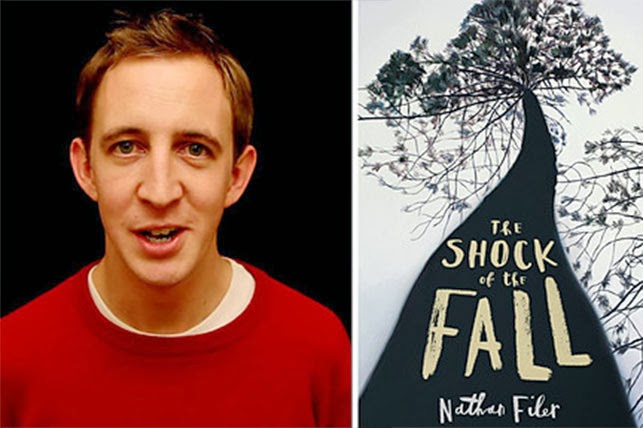 Nathan Filer has won the Costa Book of the Year with The Shock of the Fall, his debut novel about loss, guilt and mental illness.

The book follows the experience of Matthew Holmes, a 19-year-old who is haunted after witnessing his brother's death at a holiday park in Dorset.

Chairman of the judges author Rose Tremain said it was "astonishingly sure-footed" for a first novel.

"It is not just about schizophrenia - it is about grief," she said.

Filer, a former mental health nurse, looked shocked as he picked up his £30,000 prize at a ceremony in central London.

He said he hadn't prepared a speech as he had checked the betting odds earlier. He thanked the judges and his wife Emily, whom he married last week.

Filer beat best-selling novelist Kate Atkinson, whose Life After Life - a tale of perpetual resurrection - was the bookmakers' favourite to win the overall prize.

Also in the running were Lucy Hughes-Hallett for The Pike, an account of the life of Italian poet Gabriele D'Annunzio, and poet Michael Symmons Roberts for his sixth collection Drysalter.

The shortlist was completed by Chris Riddell, for his children's book Goth Girl And The Ghost Of A Mouse.

Tremain said there had been "no blood" during the final judging process but added that the decision was "not quite unanimous".

"This book stood out in a very good list. The voice in which the author has chosen to tell his story is perfectly aligned with the subject matter and very well sustained to the end.

"The book is exceptionally moving without being sentimental - we're very much hoping there will be more from this writer."

She added: "To have taken such a marvellously articulated thing from his professional life and to have brought it to life in the way that he has was a fantastic achievement."

The Shock of the Fall was snapped up by HarperCollins for a "substantial" six-figure sum.

Jo Brand - another former mental health nurse - has called the story, in which Matthew is "managed" by his local community health team, "one of the best books about mental illness".

The Shock of the Fall is the fifth first novel to take the overall prize. Kate Atkinson won for her debut novel, Behind the Scenes at the Museum, in 1995.

The Tenderness of Wolves by Stef Penney was the last first novel to win the overall award in 2006.

The Costa Book Awards, formerly known as the Whitbread, is open to authors resident in the UK and Ireland. All five shortlisted authors receive £5,000 with the overall winner getting a further £30,000.

Last year's top prize went to Bring Up the Bodies by Hilary Mantel. It was the first book to be named as Costa book of the year and win the Man Booker Prize in the same year.

Tuesday's ceremony also saw the announcement of the winner of the Costa Short Story Award. Writer and poet Angela Readman, from Newcastle, won the public vote to win £3,500 for her story, The Keeper of the Jackalopes.

Nathan Filer, 32, is a writer and lecturer in Creative Writing at Bath Spa University.

The Shock of the Fall was subject to an 11-way auction and bought by HarperCollins for a substantial six figure sum.

It was selected for BBC Radio 2's Bookclub and a Specsavers National Book Award.

Filer's stand-up poetry has been a regular fixture at festivals and spoken-word events across the UK, including Latitude, Port Eliot, and Wilderness. It has been broadcast on BBC 3 and BBC Radio 4, 7 and 5 Live.

He has also appeared at the Cheltenham Literature Festival and Hay Festival.