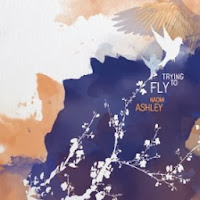 Chicago-based Naomi Ashley is a much loved and valued singer-songwriter on her local scene – so much so, the Illinois Arts Council helped fund the recording of “Trying To Fly”. It’s an unusual arrangement, which seems to have benefitted all concerned, including the listener, who gets to hear an on-form singer-songwriter backed by fine musicians and sympathetically produced.

Indeed “Trying To Fly” sounds just wonderful. The instrumentation is fulsome and rounded, and Ashley sings her songs with a hushed passion that’s wonderfully seductive; and shares a certain tone with the vocal stylings of Lucinda Williams’ mellower moments.

As for her material, Ashley writes with a full understanding of American roots music, especially folk and country, though she’s perilously hard to pin down. That’s down to both the range on non-traditional instrumentation employed, and her songs, which are always accessible and chock full of pop smarts.

The collection is launched with the title track, where a simple riff provides backbone and plentiful detail expands the track into something grand. Above all this Ashley sings beautifully and the result is a suitably spellbinding introduction. It’s followed by “Niagara Falls” and a string section provides perfect accompaniment.