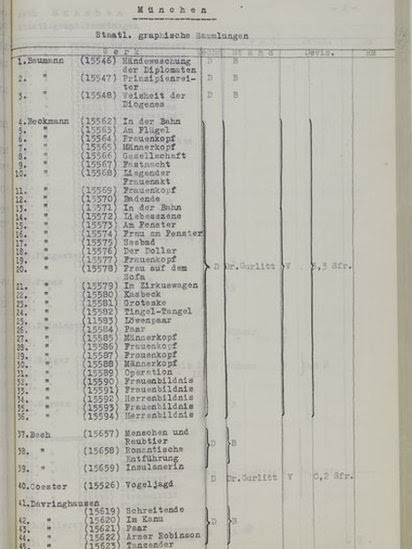 The inventory shows confiscated works acquired by Hildebrand Gurlitt,
which may be among the Munich hoard discovered last year

London's Victoria and Albert Museum is publishing online two volumes which record what the Nazi regime did with confiscated 'degenerate art'.

Hitler believed post-impressionist modern art, including Expressionists such as Kandinsky and Otto Dix, to be "evidence of a deranged mind".

He ordered more than 16,000 artworks, including works by Van Gogh and Man Ray, to be removed from German museums.

The ledgers reveal the fate of those artworks, many of which were destroyed.

Since then it has been used by art researchers across the world as they attempt to identify the provenance of particular paintings that went missing during the Nazi era.

V&A curator Douglas Dodds, who is responsible for making the ledgers available to the the public, told the BBC that the volumes were "systematically organised".

"This was a major campaign managed from the top," he told the BBC's Arts Editor Will Gompertz.

"For me there are so many echoes of what happened later to people, as well as art works."

For each institution, confiscated works are listed alphabetically by artist and include information on what happened to each piece - using symbols such as 'T' (for exchanged) and 'V' (for sold). Those marked 'X' were destroyed.

Often the name of the work's buyer and a price are given, with names including Hermann Goring and Hildebrand Gurlitt frequently recurring.

Hitler, a failed artist, maintained that "anyone who sees and paints the sky green and fields blue ought to be sterilised", there was still some "uncertainty " among other Nazi leaders about what constituted "good art", prompting Goring to buy up some of the artworks for his own private collection.

Hildebrand Gurlitt is the father of Cornelius Gurlitt, in whose Munich apartment more than 1,400 artworks were found last year, many of which were alleged to have been looted by the Nazis.

It was in response the discovery of Gurlitt's trove of paintings - including works, long thought to have been lost or destroyed, by Marc Chagall, Pablo Picasso, Henri Matisse - that the V&A decided to make the records public.

Many of the paintings withdrawn from Germany's museums had been loaned by private individuals and were never returned.

Much of the documentation held by the institutions from which the art was confiscated has never been made available to those seeking the restitution of lost art, so the V&A volumes will offer new hope.