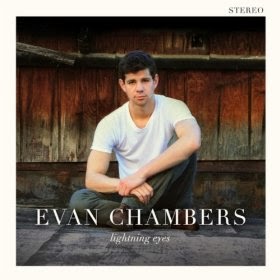 Virginia-based Evan Chambers earned his musical spurs drumming and singing in a number of groups before a stint working with acclaimed Nashville singer-songwriter Joseph Aaron, including the production of Aaron’s 2012 self-titled EP. All that experience has paid off in a variety of interesting ways. Chambers is an assured songwriter with a firm grasp of arrangements, and the production on his debut album release “Lightning Eyes” is beautifully sure-footed.

He’s also fearless when it comes to covering other people’s song - big songs, too. His take on Elvis’ “Burning Love” is a revelation. The song’s glammy rock and foot stomping pomp presentation is stripped back and then slowed to reveal a song steeped in soul and gospel - the elegiac piano adding weighty ambience. Johnny Cash’s “Folsom Prison Blues” is just as affecting. Again the pace is measured and deliberate, and Chambers inserts a resigned sadness into the proceedings, which is then augmented by various mournful strings.

While the covers provide instant reference points, and offer clues to Chambers’ influences, it’s his own songs that satisfy the most. “Wrestle the Reticence” straddles both indie pop immediacy and arena-filling grandeur, and the title track emphasizes his pop credentials with a song that should be blasting out of radios everywhere. Perhaps the best of the bunch is “Downtown Lights” (featuring Styles Lauren and Tyler Roberts). Its sophisticated, contemporary R&B is entwined with a ‘50s jazz vibe and brings to mind a grown-up “Birth of the Cool”.
www.evanchambersmusic.com
www.facebook.com/evanchambersofficial
www.evanchambers.bandcamp.com
Evan Chambers CD Baby Page
Phil S.