Review: Debbie Bond And The Trudats – That Thing Called Love 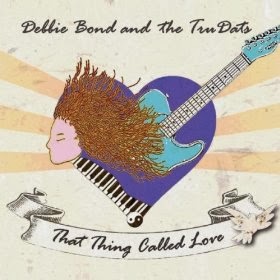 Singer-songwriter-guitarist Debbie Bond has been playing her blues (and paying her dues) for nigh on three decades, both leading her own bands and supporting the cream of her local Alabama scene at home and around Europe. All that experience is utilized on her new record “That Thing Called Love” – recorded with her guys, The Trudats, it’s a collection that showcases Bond’s many talents as well as her myriad influences.

Her ability to combine classic country and soul grooves into her Southern blues template certainly lends the album a timelessness that’s instantly appealing. She’s also surrounded herself with players who understand the subtleties of the music, and play to its inherent strengths, stepping up when required, but always leaving space for the star attractions – Bond’s vocals and musicianship.

They begin with “You're the Kind of Trouble”, and the band find their feet immediately and build the kind of chugging rhythm the Velvet Underground would have pioneered had they called Birmingham, Ala. home and never ventured north of Memphis – its home-brewed, slightly lo-fi ambiance adding to the conceit. They follow with “Steady Rolling Man”, a pre-war blues-belter, which borrows equally from the New Orleans tradition and New York’s Cotton Club.

They’re particularly impressive on the ballads, where Bond get the chance to stretch her vocal chords. “Feed My Soul” sets the tone, and “Falling” is just as special, although it’s probably the title track that’s my favourite of the slower numbers. Its mix of keys and guitar is jazzy and sultry, and Bond’s vocal provides a plethora of shivery highs.
www.debbiebond.com
www.reverbnation.com/debbiebond
Debbie Bond and the Trudats CD Baby Page
Phil S.