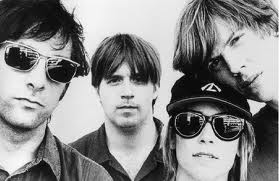 Sonic Youth have confirmed that they will release a new compilation of some of their songs selected by various celebrity fans. Entitled 'Hits Are For Squares', the album will also feature one new composition, 'Slow Revolution'.

On the same day, the band will also release their 1991 tour documentary, '1991: The Year Punk Broke', on DVD. As well as live performances by the band themselves, it also features footage of Nirvana, The Ramones, Dinosaur Jr and Babes In Toyland. If you feel so inclined, you can watch the trailer here:

And here's the tracklist for 'Hits Are For Squares':