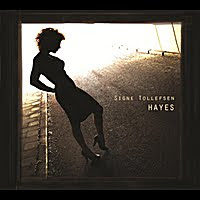 Signe Tollefsen – Hayes (Cavalier Recordings)
Educated in the UK, Dutch-American Signe Tollefsen relocated to The Netherlands in 2004 a to study music at the Amsterdam Conservatory, and almost instantly began to attract attention as a writer and singer. An American tourist passing through the Dutch city invited Tollefsen (at his expense) to Los Angeles to record some songs, and from those sessions, her self-titled debut was conceived and released to considerable acclaim. She followed that with “Baggage”, a six-track collection of covers (check out her version of Portishead’s “Glory Box”), which too was met with glowing reviews.

“Hayes” is her third release and was recorded with Ralph Timmermans from the band Mindpark. The pair share production duties and play the majority of the instruments. It was obviously an arrangement that suited both parties, as it’s an album that oozes confidence and ambition. The sound is quite dark and dense, with a cinematic, noirish quality that is mysterious and quite sexual – which is reflected in the artwork, an image that could pass as a John Alton still.

It’s an album that reveals itself gradually over several listens; it takes time to become fully aware of the quality of Tollefsen’s songs amongst the gypsy rhythms, stark strings and spectacular double tracked vocals. Try and hear “Drunk Orchestra” where it appears a host of fallen angels have been employed to provide backing vocals, or the stuttering strings on “Where You Been” and you’ll know exactly what I mean.
www.signetollefsen.com
Rob F.
Posted by Bangs at 9/27/2011 12:07:00 pm