Review: Shiny And The Spoon 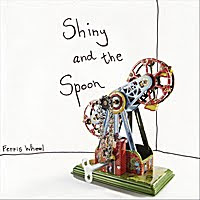 Shiny And The Spoon - Ferris Wheel (Independent)
Shiny And The Spoon are a folk-pop band from Ohio, led by songwriters Amber Nash and Jordan Neff. They both sing, either alone or together, and their band keeps it loose and organic. They sit somewhere between the stirring country rock of Gram Parsons and Emmylou Harris, and the wordy, sophisticated, pop of Prefab Sprout (see “Steve McQueen”). They take their lyrics very seriously, and it’s all too easy to be swept up in narratives that are emotionally aware, yet never overwrought.

Both vocalists bring distinctive elements to their songs – I assume they’re singing their own songs. Both are in sync with rural-pop guidelines, though the clarity of Nash’s tone brings mountain purity and a Brit-folk heritage to their music which is thrilling in its ability to make those short hairs on the back of the neck stand to attention. Neff is an altogether earthier presence, but grounds their songs, and provides a faithful rustic derivation.

Fans of literate folk-pop would do well to make a note of their name, and if its instant and total gratification you’re after, visit their Bandcamp page and give the album’s title track a whirl. You can thank me later.
www.facebook.com/shinyandthespoon
www.shinyandthespoon.bandcamp.com