Review: Pedaljets – What’s In Between 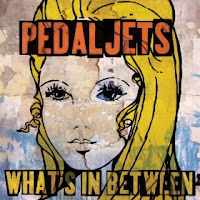 The Pedaljets’ history is a long and convoluted one, with a sixteen-year break in its middle. For those interested in the details, check out their website and/or Facebook page. It’s worth a read.

Originally emerging in the mid-80s, the band were swept up in the wave of alternative groups that included The Replacements, Husker Du, Meat Puppets, etc., and the Pedaljets crisscrossed the USA playing opening slots and headlining their own shows. It’s interesting to note that their last show on August 16th, 2013 was playing support to Bob Mould, which must have felt like déjà vu – all over again.

Their new album “What’s In Between” takes up where they left off (sort of – read that history) with a post-punk, proto-grunge sound that sounds remarkably fresh. Opening tracks “Terra Nova” and “Riverview” were initially issued as two sides of a 7” single, and provide the perfect double whammy to launch the collection. The former, a staccato stab of dark, gothic tinged post-punk, might be 30 years too late, but is just as likely to be five years too early, such is the nature of contemporary music. The fore mentioned “Riverview” is an altogether different proposition, with influences that appear rooted in Byrds(y) psychedelia, circa “Fifth Dimension”, with a catchy-as-hell chorus and guitars set on stun.

“Conversations” and “Change” show a softer side, with pop hooks aplenty, and acoustic guitars that pulse and swirl – turn them up and get lost in a perfect six-string strum. “Goodbye To All That” is the sort of song that would have made them a household name in 1987, though maybe you need a few miles on the clock for that level of self-awareness and reflective insight. By contrast, “Nothing Boy” cranks up the juvie, adolescent glam quota, and closing track “Clowns And Jackals” signs off the album on an electric high. Welcome back, chaps.
www.thepedaljets.com
www.facebook.com/Pedaljets
www.pedaljets.bandcamp.com
Rob F.