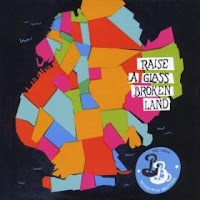 New York folk-pop duo, The New Benjamin Britton, cleverly configured their group moniker by arranging their own names: Ben Cockerham sings lead and plays guitar and bass, and the classically trained percussionist Britton Matthews hits a variety of things, including marimba and vibraphone. They shouldn’t be confused with the old Benjamin Britten.

Unabashedly positive, with a genuine, infectious enthusiasm for the music they’re making, The New Benjamin Britton make a refreshing change in a musical landscape where ‘angst’ seems the default setting. Cockerham and Matthews are intent on enjoying themselves and their upbeat tunes and cheery disposition will undoubtedly raise the spirits of the most jaded listener. That’s the plan, and frankly, there’s much to be said for unadulterated feelgood pop, especially when it comes with a streak of originality.

“Raise A Glass Broken Land” is their debut release, an eight-track collection, which showcases their songwriting chops and instrumental prowess. Matthews’ wide-ranging percussion is utterly persuasive and hints at the exotic, giving the songs an evocative, world music feel. Indeed, the avoidance of a conventional beat provides the pair with a unique calling card, and when combined with Cockerham’s wholehearted vocals, it’s nigh on impossible to come up with any direct comparisons.

The best of their songs certainly deserve a little love and attention; “Underprepared” opens the record, and it’s an instant favourite – in a just world, pop radio would be playing it to death. “The Lights Go Out” may well draw its inspiration from Tom Waits, circa “Raindogs” (I hope so) – and “The Shape of a Star” slows things down a touch without sacrificing any of their appeal.
www.benjaminbritton.net
www.facebook.com/newbenbritton
www.reverbnation.com/thenewbenjaminbritton
The New Benjamin Britton CD Baby Page
Phil S.