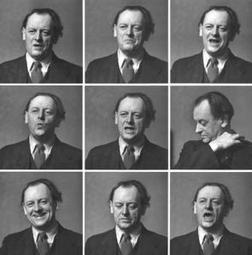 A Kurt Schwitters exhibition will be unveiled later this month at a gallery close to where the artist was interned during World War II.

Responses to Place features work made by the German-born artist while he was held on the Isle of Man.

As a German national living in the UK, Schwitters was arrested by the British in 1940 as an 'enemy alien'.

A Sayle Gallery spokesman said he made the most of his time at Hutchinson Square camp in Douglas.

He added: "It was in fact a fertile and stimulating time and this extraordinary exhibition reflects this in both Schwitters' own work and in that of other Hutchinson Square internee artists also included in the exhibition."

Painter, sculptor, typographer and writer, Schwitters once said in a letter dated August 1940 that "art cannot live behind barbed wire".

However, in the Isle of Man he was given an attic studio where he worked every day for almost 18 months.

Schwitters was interned, with more than 1,000 others, from 17 July 1940 until 21 November 1941 at the camp, which consisted of about 40 boarding houses enclosed with barbed wire.

The Isle of Man camps enabled the UK Government to imprison people thought to be dangerous to national security, without charge, trial or set term.

The Sayle Gallery is in island's capital on Douglas Promenade.

With his one-man art movement Merz, Schwitters is aid to have influenced artists from Robert Rauschenberg to Damien Hirst and Sir Peter Blake.

Earlier this year his work was the subject of a major exhibition at Tate Britain.

After being released from the Isle of Man camp, Schwitters moved to London and later to the Lake District where he spent the final three years of his life.

The artist was working on his final creation, the Merz Barn near Ambleside, Cumbria, when he died in 1948.

Kurt Schwitters: Responses to Place will be on display at the Sayle Gallery on Douglas Promenade for one month, from 27 September.