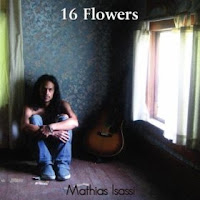 “16 Flowers” is Mathias Isassi’s fourth long-player of his career, and he’s described it as his “love album”. The young singer-songwriter has certainly taken his time to get it right: its three-year gestation undoubtedly reflects his desire to present material which explores one of the basic aspects of the human condition, whilst simultaneously avoiding the multitude of clichés and formulaic writing that litters the associated genre. This he’s achieved through an almost conversational style that’s full of soul and gentle poignancy, but never overly fraught. It’s a subtle approach and makes “16 Flowers” easy to engage with, and a record that improves with each spin.

Based in Kingsville, Texas, Isassi is a regular attraction in his home state, touring for much of the year and playing wherever he can find an audience. That experience tells on his new record, where his songs feel refined and developed, and utterly stripped of excess. The album opens with one of his best, the spellbinding “For the Way I Feel for You”. As a statement of intent it works beautifully - as it sets the scene, with Isassi’s simple guitar lines bringing warmth and combining perfectly with his voice and the sentiments expressed. The title track is almost a love letter and his return to “The Greatest Journey” (the original appeared on his 2007 debut “Last Chance”) is brighter and a touch more animated. Fans of Terry Callier and contemporary songwriters like Damien Rice should make a note of his name.
www.facebook.com/mathiasindiesoulkrock
www.reverbnation.com/mathiasisassi
Mathias Isassi CD Baby Page
Phil S.