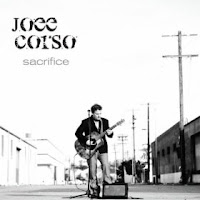 Over the years, Los Angeles based Joee Corso has fronted a series of acclaimed bands, including Abbey Booth, Grand Daddy Purple, who toured extensively in Europe, and the titular Joee Corso Band. In 2008 he moved to Topanga Canyon to concentrate his time and talents on a solo career, gigging regularly, composing for film and television, and releasing his “Live At Genghis Cohen” EP in 2011.

“Sacrifice” is his latest EP, a four track release recorded with producer / bassist Nick South, with Rob Perkins on drums. Though the artwork on the cover suggests a bare-bones, stripped back approach, the opposite is true. Corso and his compatriots have shaped a warm, enveloping sound, the perfect setting for his rich voice and songs. It’s a sound that can be loosely defined as folk-rock, but it’s a sophisticated, urbane version, with a sadness at its centre that is redolent of bygone misfortune and missed chances.

His voice and the shadowy emotional pull he applies to his lyricism brings to mind artists like Eddie Vedder, the Buckleys (Tim and Jeff) and the brilliant David Ackles, though there are glimmers of light to counter the shade. Corso opens the collection with “Seven Doors”, a call for salvation, and South’s fluid basslines dance provocatively around the rhythm. The title track is almost a country shuffle, but with a gothic folk heart, and the gentler “Bus to Tampa” ends the record with a degree of hope and perhaps a little redemption.
www.joeecorso.com
www.reverbnation.com/joeecorso
www.facebook.com/joeecorso
Joee Corso CD Baby Page
Phil S.