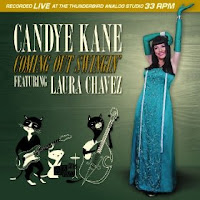 Although there’s a clue in the title, the first bars of ‘Coming Out Swinging’ should still surprise long-time admirers of punk-babe-turned-blues-shouter Candye Kane. Her recent releases such as 2011’s ‘Sister Vagabond’ have hinted at a growing jazz bias; but the full-on big band commitment of both the title track and Benny Goodman’s ‘Rock Me To Sleep’ (which follows hard on its heels) seems a radical departure from her more familiar blues and soul catalogue.

Once normal service is restored, with the Bessie Smith influenced ‘I’m the Reason Why You Drink’ and the rocking ‘Rise Up’, the opening salvo stands as a wholly appropriate introduction to a set of songs which combine characteristic world-weariness and an indefatigable sense of resilience with an insistence that a good time can still be had, regardless of it all. Kane’s personal performance across all styles is variously raunchy, raw and smouldering; a consistent and emphatic reminder that she is one of modern music’s genuine divas.

Recorded live in the studio with a strong supporting cast led by Laura Chavez, a guitarist of outstanding versatility, this may be the most impressive collection so far of her twelve-album plus career; and with the momentum behind her, the promise of even better to come.
www.candyekane.com
www.vizztone.com
Neil B.