Review: The Deems – Limes and Forms

The Deems – Limes and Forms (Independent) 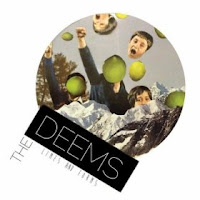 Rapidly acquiring a reputation as Harrisonburg, Virginia’s most popular jam band, the talented and versatile quartet play a hip blend of improvised psychedelia, blue-eyed reggae and baggy-funk. I don’t suppose they could be accused of being overly cutting edge, though the musical combinations they concoct sound remarkably fresh, and interestingly, they seem completely at home in a studio setting. That’s not always the case with bands that thrive on stage, spontaneously stretching their songs and finding new angles to explore. Here, each song feels just right. There are no premature endings and the band make plenty of space for individual members to solo – and they play their six tracks in a smidge over 32 minutes, so they’re hardly in a rush.

They begin strongly with “Thinking Go”, where brass and keyboards bolster its easy groove, and the effect is not unlike a heady mash-up of late-period Can, Happy Mondays, and Dutch proggers like Focus. “401k” is probably the closest they get to a pop song, while still making room for space-jazz keyboards and a propulsive beat. They continue their jazzy explorations on “Limes” though this time it’s a fusion sound they go for and the result is dance-floor friendly with a strong vocal hook. The centrepiece track is “Crustache”, a seven-minute workout that comes in several linked parts and features a range of guitar styles – from Jerry Garcia’s feather-light leads to Freddie Stone’s funk - massive Bootsy-style basslines, swirling keys, and a spoken word, proto rap vocal.
www.sourdeemsters.com
www.facebook.com/thedeemsband
The Deems Bandcamp
The Deems CD Baby Page
Phil S.