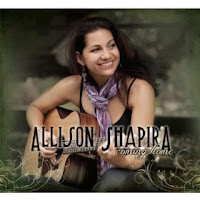 Describing herself as a recovering opera singer, in 2012 Allison Shapira decamped from Harvard, and what reads like a particularly highflying career in communications and the diplomatic corps, to play the European coffee house circuit, with nothing but her new songs and an acoustic guitar for company. Remarkably, she’d only begun playing and writing lyrics the previous year.

She seems to have taken to the instrument quite naturally, eliciting a warm, unfussy tone from the strings, and what she lacks in technical know-how, she more than compensates with a voice that’s simultaneously rich, honeyed, dense and altogether quite beautiful. Set alongside her delicately picked guitar, it’s the groundbreaking early works of Joan Baez that come most readily to mind, though Shapira concentrates far more on her own material, rather than the traditional oeuvre. Interestingly, the one cover on “Coming Home” is Baez’s mid-‘70s calling card “Diamonds and Rust”.

The album begins with an absolute gem; “Man Walks By” is a love song of sorts, but with all the ambiguity and maturity of a classic Carole King or Carly Simon number. “All Along” recounts the tale of that initial trip to Europe, though not the adventure, but rather the heartbreak of leaving someone special behind. Known by her growing fan base as ‘Allison from Boston’, perhaps it’s her “Song for Boston” that best defines her. It’s another love song, but this time it’s for a city, and much like the rest of the record, it’s heartfelt and sincere.
www.allisonfromboston.com
www.facebook.com/AllisonShapiraMusic
www.reverbnation.com/allisonshapira
Tony S.