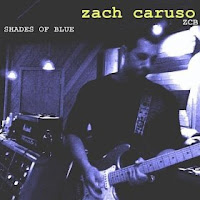 Since his debut album “Body & Soul” was released in early 2008, Zach Caruso has been touring his socks off, recorded a second album in 2010 (“Neon Lights”), earned a Master's degree in journalism and continues to hone his craft. A native of New Jersey, he displays all the musical traits you’d expect, an earthy, soulful approach to his performance and although he’s an accomplished guitarist, the songs invariably takes centre stage.

The one cover, Bill Wither’s “Ain’t No Sunshine” is muscular and burly, but doesn’t diminish the song in any way, and also provides a central point for the seven-track (38 min.) collection. As you can see, Caruso isn’t in any hurry and his songs benefit from the extended mixes. “Promised Land” is a fine opening cut, with its biblical references and driving rhythm, and “I Am David” is just as forceful and eloquent, and showcases his compelling guitar playing. “Come Now, My Enemy” calms the storm, and “Blanket Of Snow” is almost delicate compared to the earlier tracks. Although “The State I'm In” goes some way to redress the balance, before the concluding title track brings things to an unruffled climax, that is, until Caruso blows away any remaining cobwebs with an extended, and quite brilliant, solo.
www.zachcaruso.com
www.facebook.com/ZachCaruso
Rob F.