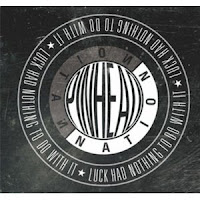 Pinhead Nation - Luck Had Nothing To Do With It (Onomatopoeia Records)
'Where’s Herne Bay?' is a question that isn’t answered on this album, because this odd, scalding single by the band isn’t on this album. You might think this is because it was written and recorded in 1993, so after 19 years it hasn't got a hope in hell of getting on a new album. I thought that too, until I read that this album has been in gestation since 1993, so "Where Is..." could easily have qualified. What a very strange fact that is, but no stranger than the music we are presented with on these 13 ungainly, awkward, stop-start tunes.

“Luck Had Nothing To Do With It” is an album of angular sounds, with occasional melody, and at its best when a punk element is thrown in for good measure. I was going to dub them the avant-garde Jam, but thought better of it, as that particular description only partly fits the lead track "Jail On Wheels". After this opening cut it’s maybe more reminiscent of Wire, but an uncoordinated and weird Wire, bent out of shape and left rusting over the years. Wiry, unpredictable and untamed music then, but with a rhythm section that has the bass forever chasing the drums, and the results are mixed. Along with the lead track, the song with the most grace is "Years Of Neglect", and apart from the usual time changes, it’s just about okay.

Overall the album has a disjointed, inelegant feel to it, with a broken, unhinged, rhythm that at best is slightly dysfunctional; perhaps not that surprising when you consider this music has been developed so slowly, taking so many years to come to blighted fruition. Possibly an album for fans only, and anyone who doesn't mind music that is jerky and jerked, with added jerkiness on the side.
www.facebook.com/pages/Pinhead-Nation
Kev A.