Review: Dinsmore / Callard - If We Could Fall In Love Again

Dinsmore / Callard - If We Could Fall In Love Again (Rider Records) 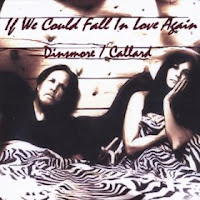 Rick Dinsmore and Jos Callard got together in 2005 and moved to Austin a year later. They follow in the tradition of Americana musical pairings such as Buddy and Julie Miller, Gillian Welch and Dave Rawlings, Robert Plant and Alison Krauss, and EmmyLou Harris and, well, just about everyone. On “If We Could Fall In Love Again” they’re joined by a full band of talented young players and experienced session musicians, who between them have performed with everyone, from Manhattan Transfer to the Brothers Johnson and Bruce Hornsby. Needless to say, the musicianship here impresses from the off, and coupled with the duo’s contrasting vocal styles, “If We Could Fall In Love Again” deserves serious attention and much consideration.

The album begins with “Mr Blues”. Dinsmore takes the lead and he’s in possession of a fine county voice; the sort of voice that’s simultaneously new and yet completely familiar, and comes laden with roots tradition. Rich and warm, I suspect I’d happily listen to him sing the Spice Girls back catalogue, though I hope he doesn’t test the theory. The pair alternate lead vocals, and both provide harmony backing. Callard’s voice is quirkier with more of a bohemian folk edge. The first name that came to mind was Edie Brickell, though it’s more of a feel rather than a direct similarity. On “It's Your Night” there’s even a suggestion of Debbie Harry, which to my ears is a very good thing, and it’s a highlight of the set. As is the very last number, a fine uncluttered version of Joe ‘Red’ Hayes and Jack Rhodes’ “A Satisfied Mind”, a song that’s been covered more than most, they manage to find something fresh and new.
www.facebook.com/dinsmorecallard
www.reverbnation.com/dinsmorecallard
Rob F.